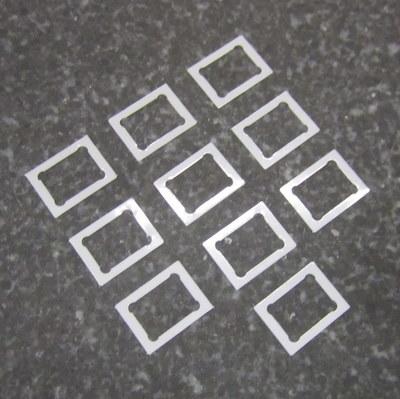 LPE CNC Machined precision magazine shims are one of the simplest and cheapest upgrades available for 'gas in mag' guns on the market today. Magazine shims are placed under the gas router on the top of GBB & NBB magazines to push the rubber seal up so it forms a better seal with the loading nozzle which can give some of the following improvements in performance*,

Installation is very easy and completely reversible requiring no modifications to the gun or magazines, with the feedlips removed 1 – 3 shims are placed in the top of the magazine under the gas router and the feedlip reinstalled to get an optimal seal against the loading nozzle. Please note that more pressure on the feed lips will be required in some cases to reinstall retaining pins and care should be taken not to damage the pins or feed lips themselves.

Each shim is fully CNC machined in the United Kindom from 0.19mm thick plastic shim sheet.

Tested and confirmed to fit the following WE gas pistols :-

*Please note that improvements in performance will vary depending on the condition and/or fit between parts in the magazine and BBU assemblies, they are unlikely to improve a seal between the magazine gas router and loading nozzle that is already optimal.